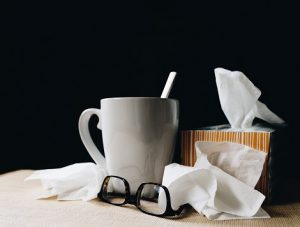 It’s that time of year again.

The weather is getting colder, the nights are getting darker, and the adverts for flu remedies have started to appear on the television.  The cold season has begun!

Whilst colds can occur at any time of year there do seem to be more about during the Winter months as our energy naturally takes a bit of a dip and we spend more time indoors – both ideal opportunities for bugs to spread.

But is having a cold really such a bad thing?

Certainly all those adverts you see on the television would lead us to believe that it is, with their endless promises of being able to ‘zap’ those typical symptoms of a sore throat, runny nose and headache as soon as you feel the first twinge so that we can keep on going, but maybe this isn’t quite the right approach.

So here I go again with another strange comment from a therapist!

Having a cold can be a sign of good health.

Yes, that’s right.  The symptoms of a cold can demonstrate that actually your immune system is working well.  How?  Well, whilst that runny nose and cough, for instance, is undoubtedly uncomfortable, they are really the body’s attempt to deal with the bacteria and viruses.  Your body produces mucus, for example, to capture the bugs then makes your nose run and you cough to ‘expel’ them – clever really!  If your system didn’t do this then the bacteria and viruses could take hold and cause you more problems in the long run.

Consequently getting a cold a couple of times a year which just lasts a few days is not a bad thing.

Now of course getting endless colds which last longer than a few days, or getting a cold when you have underlying health issues is a different matter, and you should take action to deal with the issues.  But otherwise, if you are generally in good health then simply allowing the body to ‘do its thing’ rather than reaching immediately for the off the shelf cold remedies to suppress the symptoms is probably the better option as it will help to strengthen that all important immune system meaning it works even better in the future.

OK – I know what you’re thinking!

It’s all very well to just allow those pesky symptoms to take their course but we all have lives to lead and things to do so sometimes you need a little support to at least make things a bit more comfortable.  If so, then take a more natural approach; Echinacea is a great supplement for this time of year to boost your immune system and increasing your dose at the first signs of a cold can help to reduce its impact, steam is great for clearing a blocked nose and sinuses, and good old fashioned hot water, lemon and honey can’t be beaten for sore throats, coughs and generally feeling under the weather!