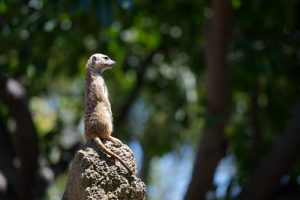 Over recent years meerkats have become a firm favourite of the natural world,

popping up on our screens in many of the wildlife documentaries, making a star appearance in zoos and wildlife parks, and even a bit of a splash in the world of advertising!

If you’ve ever watched the films of them in the wild you will have noticed that whenever they are out as a group feeding there is always one meerkat who is standing guard, so to speak, stood up on their hind legs in that way we find so endearing, constantly scanning the surroundings for signs of danger so as to warn the others of any possible threat.  In this way the rest of the group can go about their daily business safe in the knowledge that they are being looked after.

It turns out that there is a part of our brain which also has meerkat tendencies!

Our brains have developed over the thousands of years of our evolution, with each new part reflecting our advancements in intelligence and ability.  But the ‘older’ parts still remain.  One such part is what is sometimes referred to as our primitive brain, the original bit so to speak, and its function reflects our existence at that time, one of basic survival.  It is this part of our brain that still, to this day, drives our basic survival instincts.  As such an element of it works the same as that sentry meerkat, constantly scanning our environment for signs of danger, and alerting the body to take action when a threat is perceived – the flight or fight response.  In this way our bodies, like the group of meerkats, are free to get on with the task of living life knowing that that they are being kept safe.

So all well and good, both our primitive brains and the sentry meerkat have a job to do and they do it well!

At least some of the time ……

Imagine what would happen if it was a particularly nervous meerkat that had the job of sentry one day.

A meerkat that saw a threat in just about everything. Imagine the chaos in the group if this meerkat sounded the alarm all the time, and the rest of the group were constantly running for shelter, unable to feed properly or go about their daily business in a relaxed way.  Eventually it would have a serious impact on the health of the group, or worse still, they would start to ignore the warnings placing themselves in potential danger.

The same can happened to our primitive brains.

The sentry can become over anxious raising the alarm when it doesn’t need to, and putting the body into a near constant state of alert with potentially devastating results for our ongoing health.

And why does this happen?

Often it’s the result of a loss of self-regulation due to an increased stress load; stress from our environment, physical stresses and, possibly the most problematic of all, emotional stress.

So is your meerkat over anxious and raising the alarm too often when it doesn’t need to? And could emotional stress be a factor in that?

If so, taking some simple measures to settle your primitive brain could pay huge dividends for your health: